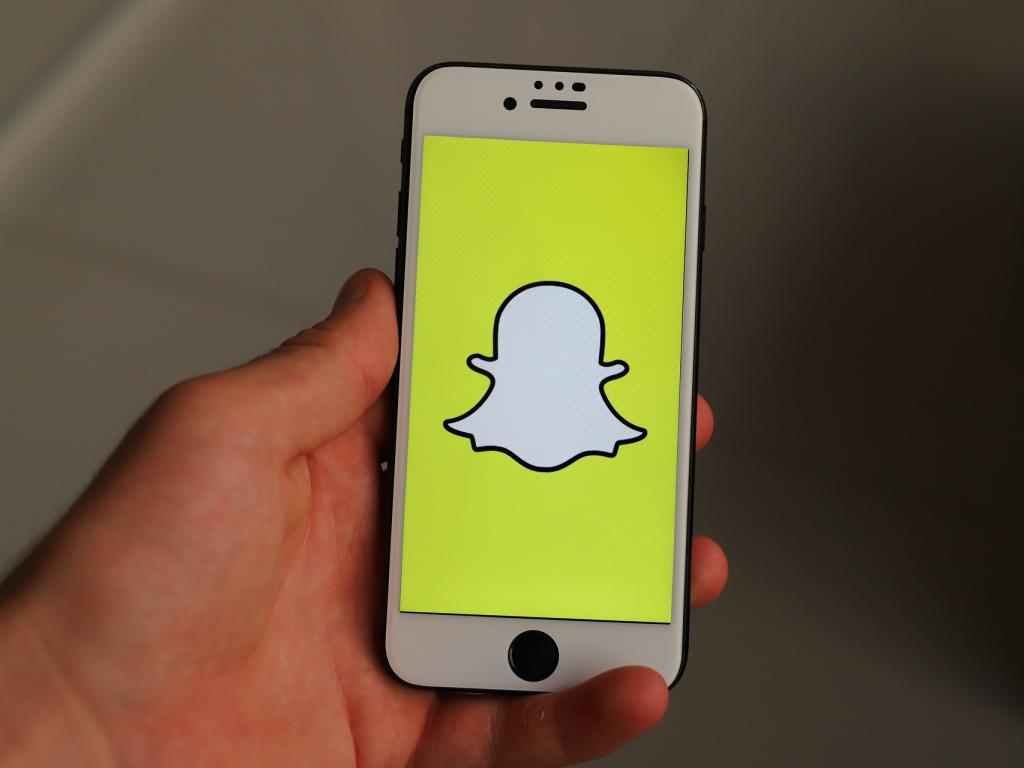 Last Friday was when the bottom began to fall out. A week later, things feel very different as earnings continue to hold the day.

We’re on pace for the S&P 500 Index (SPX) to be up 1% for the week if things don’t head lower today, which is pretty amazing when you consider what happened Monday. It arguably indicates how much resilience remains in the market. A positive session today, if it happens, would be the fourth straight.

The big comeback since Monday has been powered by solid earnings across a bunch of different industries. Twitter (NASDAQ:TWTR) and Snap (NYSE:SNAP) got in on the fun, perhaps setting the table for Facebook (NASDAQ:FB) and other tech giants next week. Strong user growth reported by SNAP helped lift shares in pre-market trading, and TWTR shares rose after the company reported revenue that exceeded the average analyst estimate.

If there’s a soft spot so far, it’s arguably in the semiconductor area. Both Intel (NASDAQ:INTC) and Texas Instruments (NASDAQ:TXN) failed to impress investors with their outlooks, and shares of both are playing defense.

Aside from that, we’ve seen nice reports this week from across a wide range of industries, including Health Care, Tech, and this morning in Financials as American Express (NYSE:AXP) appeared to impress with its results. It’s still very early and a lot could change, with next week representing the peak of reporting season. Things are off to a nice start with some of the heavyweights, though, including quarterly performance and the majority of company outlooks.

Another good thing to see early today is the 10-year Treasury yield popping back up and knocking on the door of 1.3% again, which in theory could help Financials. Meanwhile, the Cboe Volatility Index (VIX) is back below 17. That’s after it jumped to nearly 25 on Monday. Now it’s down to where it spent most of its time a week or two ago before the craziness began.

If there’s anything that could potentially knock stocks off their pedestal, it might be worries about China’s continued regulatory crackdown. Shares of China’s ride-sharing firm DiDi (NYSE:DIDI) fell sharply in pre-market trading after Bloomberg reported that Beijing is considering harsh penalties for the company. Shares of some other Chinese companies listed in the U.S. are also getting hurt before the open. So far, this weakness doesn’t appear to be spilling into the broader market, but keep an eye on it just in case.

Mega-Caps Bask In Their Gains

If you want to sum up Thursday’s action on Wall Street, maybe it’s fair to say the mega-caps are back.

We’re talking Apple (NASDAQ:AAPL), Microsoft (NASDAQ:MSFT), Amazon (NASDAQ:AMZN), all members of the $1 trillion market-cap club, advancing more than 1% even as the broader market barely budged. That’s the kind of mode we were in earlier this month before Financials and Energy made a rebound earlier this week.

Things went kind of the opposite way from the first days following Tuesday’s recovery, with Financials and Energy heading back down. There wasn’t a lot of rhyme and reason to this, because crude edged higher and is back above $71, while the closely-watched 10-year Treasury yield that often affects bank shares stayed relatively stable just below 1.3%. It’s possible investors are worried that the failure of yields to recover as quickly as the stock market from Monday’s selloff could signal more concerns about the economy.

Typically, low yields have tended to help the mega-caps, so that could explain their strength Thursday even as so-called “cyclical” sectors like Industrials and Energy that often do better in a stronger economy lost ground. But it was just one day, not a trend. We’ll have to see where this pattern takes us Friday and into the weekend.

The cyclicals and yields might have been hurt late this week by some less than stunning economic data. Initial jobless claims above 400,000 yesterday were unexpectedly high, and leading indicators came in a bit light compared with analysts’ expectations. Both of these contributed to the lack of luster for cyclical shares Thursday. As research firm Briefing.com noted, the pace of growth in leading indicators is slowing, from 1.4% in March to 0.7% in June. The June growth is the slowest pace since February.

One day isn’t a trend, but several months is definitely a trend and leading indicators can be an important economic guidepost. Still, 0.7% isn’t exactly a disaster, even if it was below the Street’s expectations. So keep an eye on it, because historically, leading indicators have turned down before the economy has turned down. A positive reading may reveal the economy is heading in the right direction.

Another thing that’s worrisome is the underperformance of small caps. The Russell 2000 Index (RUT) is a small-cap index that has a heavy weighting in Financials, so its 1.5% drop yesterday is partially due to the bank weakness. Still, RUT traditionally has been seen as a barometer, especially of the U.S. economy since so many smaller stocks are more domestically focused. Still, RUT is up a bit more than the S&P 500 Index (SPX) since Monday’s weak close, while lagging the SPX year-to-date.

Even as RUT suffered yesterday, Health Care has been on a roll. It’s the third-best performing sector over the last month behind Tech and Consumer Discretionary, and Johnson & Johnson’s (NYSE:JNJ) nice results earlier this week might be helping it add to gains.

A couple of the discretionary companies had nice days Thursday as Nike (NYSE:NKE) and Domino’s Pizza (NYSE:DPZ) were among the leaders on the scorecard. It’s also good to see positive guidance coming from a bunch of companies that reported this week, including AT&T (NYSE:T). Transport earnings from railroads and airlines have been very good so far, and one school of thought suggests that transports can be a barometer of the broader economy. 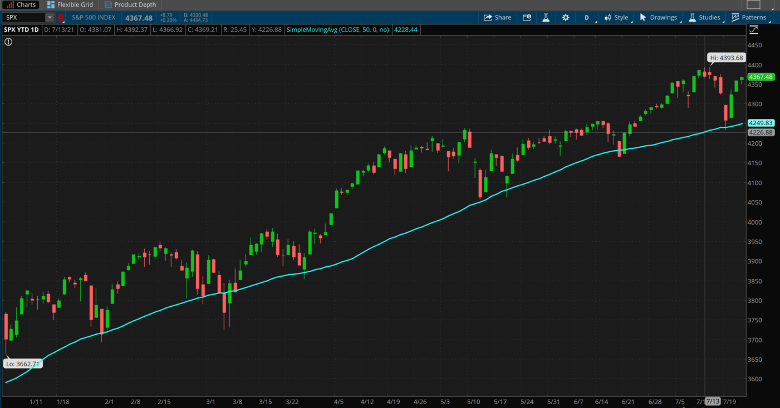 CHART OF THE DAY: THE TOP 50. See that blue line? That’s the 50-day moving average of the S&P 500 Index (SPX—candlestick). As you can tell from this year-to-date chart, every time the SPX has dropped to the 50-day MA, it’s bounced back, the most recent occasion being Monday. Data Source: S&P Dow Jones Indices. Chart source: The thinkorswim® platform. For illustrative purposes only. Past performance does not guarantee future results.

Earnings-Palooza Begins Monday: Next week’s earnings calendar really gets busy, and there’s a Fed meeting, too. Some of the major companies expected to report include Tesla (NASDAQ:TSLA), Alphabet (NASDAQ:GOOGL), Apple (NASDAQ:AAPL), Facebook (NASDAQ:FB), and Amazon (NASDAQ:AMZN). Leaving TSLA aside, that’s quite a mouthful of FAANGs. Microsoft (NASDAQ:MSFT), sometimes thought of as an honorary FAANG, is also on next week’s calendar. Buckle up!

Bumping Our Heads: Just when you thought it might be safe to go outside again, another stumbling block appeared on the horizon. No, we’re not talking about the Delta variant of Covid, though that’s obviously still a concern. It’s Congress that could be an additional thorn in the market’s side. Congress is starting to fight about whether to raise the debt ceiling just 10 days before the deadline. Any signs of a drawn-out battle over this could get investors nervous about the U.S. credit rating, which could raise concerns on Wall Street.

Back around this time 10 years ago, Congress and then-President Obama wrestled for weeks over this same issue, and that corresponded with a 17% decline in the SPX between early May and early August of 2011. Correlation isn’t causation, but at the time many analysts said the Washington worries played a role in the summer slump. Stay tuned, because legislators basically have until the end of the month to resolve this.

Reading, Writing, And ’Rithmetic: It’s hard to believe, but a lot of kids will be heading back to school soon, with more schools on schedules where a long summer vacation isn’t a given. Even for many kids on traditional calendars, the bell rings in just over a month. That means it’s time to think of the retail sector and how “back-to-school” shopping might shape up. A recent Deloitte report said back-to-school sales will hit $32.5 billion, the highest in at least five years. Part of that could represent pent-up demand after many kids were home last year due to the pandemic.

While “back-to-school” may conjure up visions of kids and their parents combing through Walmarts (NYSE:WMT) and Targets (NYSE:TGT) looking for Trapper Keepers, there’s also electronic equipment to consider. Schools and families could be in the market for up-to-date technology as the school year approaches, so that trail may lead to some key Tech companies providing hardware including Apple (NASDAQ:AAPL), Lenovo (OTC:LNVGY), Dell Technologies (NYSE:DELL), and HP (NYSE:HPQ). Having said that, recent media reports note that PC sales have slowed recently due in part to consumers having new priorities after aggressively buying PCs throughout the pandemic. Also, parts shortages are cropping up in the sector, Barron’s reported.

Image by MrJayW from Pixabay