NASA’s next-generation space telescope won’t launch until Halloween of 2021, yet another delay in the spacecraft’s drawn-out development.

The James Webb Space Telescope (JWST) will scan the universe for life-hosting planets and attempt to look back in time to photograph the Big Bang. It will now have to wait an additional seven months to being that mission.

Program managers said the coronavirus pandemic forced employees out of contractor facilities, causing unforeseen delays, and new COVID-19 safety practices going forward will slow down testing processes. A NASA press release also cited unspecified technical issues, and officials associated with the project declined to clarify what those issues were during a call with reporters on Thursday.

It’s been almost 30 years since the launch of the Hubble Space Telescope, which the JWST is intended to both complement and supersede: It packs new infrared technology to detect light beyond what the human eye can see.

The telescope will be able to record extremely faint signals, too. Its goal is to study every phase of the universe’s history, helping reveal how the first stars and galaxies formed, how planets are born, and where there might be life in the universe.

A 21-foot-wide folding beryllium mirror will help the telescope observe faraway objects in detail. A five-layer, tennis court-size shield protects it from the sun’s heat and blocks sunlight that could interfere with the images. 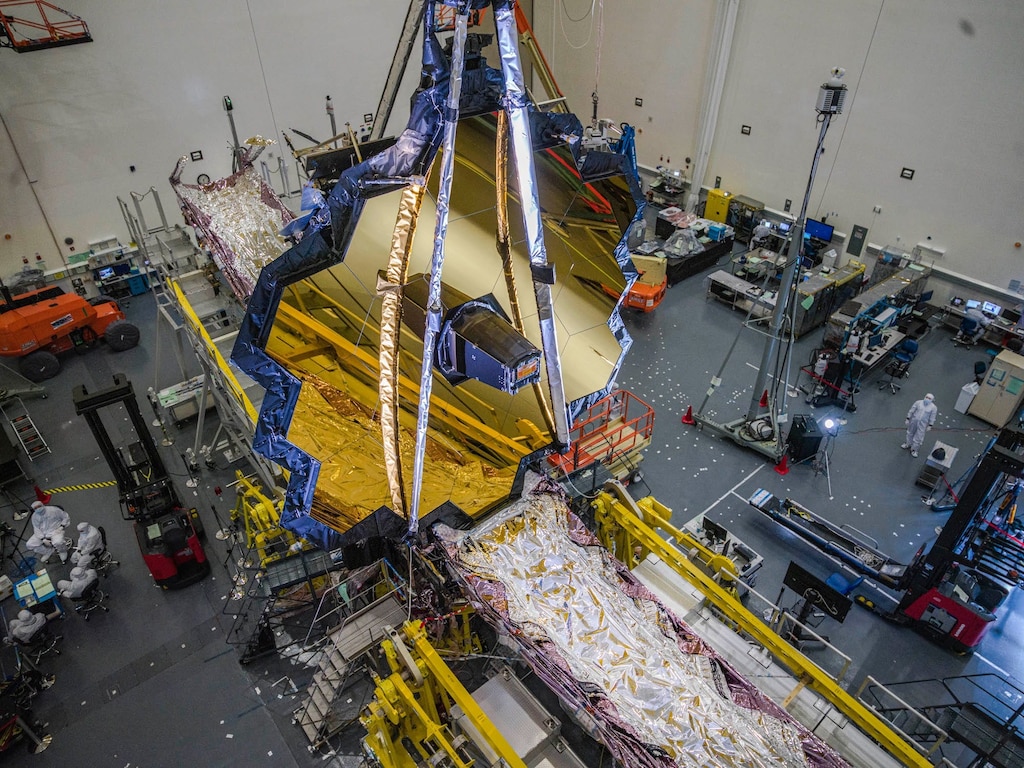 The farther JWST looks out into space, the more it will look back in time. It could even detect the first glows of the Big Bang.

With new infrared technology, the telescope could help answer questions about how our galaxy and its black hole formed.

“Does the black hole come first and stars form around it? Do stars gather together and collide to form the black hole? These are questions we want to answer,” Jay Anderson, a JWST scientist, said in an October 2019 press release.

The Webb telescope is long overdue and cosmically over-budget As originally conceived in the 1990s, JWST was supposed to cost $500 million and launch in 2007. However, it saw a major redesign and numerous delays along the way.

Prior to the delay announced Thursday, NASA was targeting a March 2021 launch date. Managers of the mission said the delays shouldn’t cost anything beyond the agency’s existing and expanded budget, capped at $8.8 billion for development.

However, Steve Jurczyk, NASA’s associate administrator, noted the mission is dipping into its reserves to cover the schedule slip. (NASA officials previously said the program cost about $1 million per day of delay.)

“There is an opportunity cost,” Jurczyk said in a call with reporters on Thursday. “If we had hit the March of 2021, those reserves could have been released to cover issues on other programs or to maybe start, accelerate a mission.”

A 2019 analysis from the US Government Accountability Office estimated that the JWST will ultimately cost roughly $9.7 billion — but that was with a launch date set for March 2021. Gregory L. Robinson, manager of the JWST program for NASA, said three of the seven months’ worth of delay was brought about by the ongoing coronavirus pandemic, leaving the other four months of delay unspecified. He and other officials did not directly answer questions asking to specify to what extent Northrop Grumman, the project’s lead contractor, was responsible for the remaining four months of delays.

However, Jurczyk said the delays were necessary to ensure all of the pieces of the JWST program — the most complex telescope to launch yet — were in place.

“The program did the right thing because they were focused on mission success,” Jurczyk said during the call.

NASA and Northrop Grumman completed the telescope’s electrical testing this week. The team will continue strenuous environmental tests to ensure that the observatory can survive the harsh conditions of space. Then, in summer 2021, the telescope is set to ship to its launch site in French Guiana.

“We’re not expecting to go beyond October 31st. We have high confidence in that,” Robinson said.