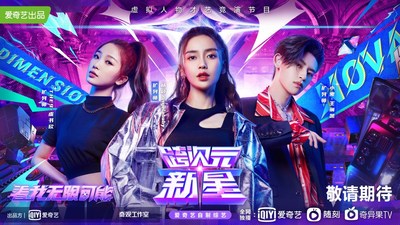 Dimension Nova is iQIYI’s first foray into a new genre that innovatively combines the traditional variety show format with Nijigen culture. Nijigen is an umbrella term for a wide range of Japanese-influenced media, including manga, anime and video games. In China, Nijigen culture has risen in popularity in recent years. According to data from market research firm iResearch, the number of pan-Nijigen users in China reached 390 million at the end of last year.

iQIYI integrated a number of cutting-edge technologies in the Show’s production. Dimension Nova pioneers the combination of real-time data from motion capture and real-time rendering for recording, allowing celebrity guests to interact directly with avatars and delivering audio-visual effects previously unimaginable in variety shows. In addition, iQIYI piloted the use of digital twin technology in the filming of the Show for the first time in the industry. By creating a full 3D virtual environment or “twin” of the real world, the technology integrates the real with the virtual, creating an ideal stage on which the avatars can perform. Moreover, revolutionary CG real-time rendering and compositing technology as well as a proprietary toolset enable Dimension Nova to achieve a non-linear production process, significantly improving the production efficiency of the Show. iQIYI believes that these innovative production techniques will be the driving forces behind the rise of virtual idol-based variety shows.

Through this fresh and novel approach, iQIYI aims to forge a strong bond with young viewers. Although Dimension Nova is the first virtual variety show produced by iQIYI, it is not the first time the Company has innovated in the virtual space. In 2018, iQIYI unveiled the world’s first virtual AI/AR sign language interpreter, allowing hearing-impaired viewers to enjoy the Company’s content with greater ease. Last year, iQIYI also launched RiCH BOOM, iQIYI’s first virtual idol label and pop band. Since then, Producer C, the leader of RiCH BOOM, and Rainbow, the band’s drummer, have made appearances at public events and in variety shows.

With its superior original content creation capabilities, iQIYI has successfully launched many popular variety shows in the fields of teen idol, rap culture and lifestyle, such as Youth With You, The Rap of China and FOURTRY, which have been highly popular with young audiences. As the domestic virtual idol market remains untapped, iQIYI is establishing a significant first-mover advantage with the launch of Dimension Nova. The Company is also continuing to leverage its strengths in technology and entertainment to cater to users who increasingly crave more diverse content, giving rise to a “cross-dimensional” trend through its cutting-edge take on the variety show genre.