NEW YORK, March 22, 2021 /PRNewswire/ — Over the past few days, representatives of GoldenTree Asset Management (“GoldenTree”) held discussions with officials and advisors of the Province of Buenos Aires (“Province”) under a non-disclosure agreement.  In response to amended restructuring terms for the Province’s international bonds provided to GoldenTree by the Province, GoldenTree provided to the Province an indicative restructuring proposal that is included as an Annex to this statement. 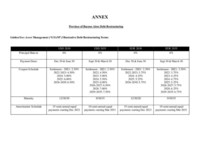 GoldenTree’s proposal would provide significant debt service relief and leave the Province in a sustainable position that would enable the Province to invest and grow over the coming years. Despite numerous subsequent conversations that evidenced GoldenTree’s willingness to continue engaging with the Province in a constructive dialogue and further contact from the Province’s financial advisor regarding process, the Province did not make any further proposals and terminated the negotiations.

While GoldenTree entered into the discussions with the Province in good faith with the aim of achieving a consensual resolution, our hope that the Province would pursue a realistic approach to the bond restructuring process was not realized. The amended restructuring terms provided to us by the Province, which were published yesterday, do not come close to reflecting the current payment capacity and economic prospects of the Province. This is not a case of a Province that cannot pay a reasonable amount of debt service to its bondholders due to fiscal constraints, but rather of one which is simply unwilling to do so. The choice of the authorities to pursue this path is unacceptable and risks permanently impairing the Province’s access to capital markets.

We remain open to considering proposals from the Province that fairly reflect the reality of the Province’s financial and economic position, but in the mean time we will take any and all actions appropriate to protect our legal and contractual rights.

About GoldenTree
GoldenTree is an employee-owned, global asset management firm that specializes in opportunities across the credit universe in sectors such as high yield bonds, leveraged loans, distressed debt, structured products, emerging markets, private equity and credit-themed equities. GoldenTree was founded in 2000 and is one of the largest independent asset managers focused on credit. GoldenTree manages over $41 billion for institutional investors including leading public and corporate pensions, endowments, foundations, insurance companies and sovereign wealth funds. For more information, please visit www.goldentree.com.