BEIJING, Aug. 13, 2020 /PRNewswire/ — On August 4, FORU Trucking, a technology logistics company, and Trunk, a service provider of autonomous driving technology for trucks, together announced the establishment of a joint venture and held a signing ceremony. 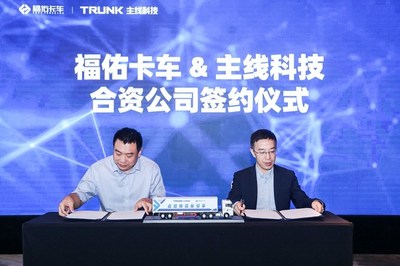 FORU Trucking and Trunk are both firm believers and pathfinders of the idea that technology transforms logistics. The two companies have been cooperating on road testing of autonomous vehicles since the second half of 2019. They have completed tests on 10 routes with more than 300 tests, and accumulated effective testing data. Guanling Chen pointed out that with the initiative of new infrastructure, autonomous driving is a new turning point in development and will bring revolutionary changes to road transportation.

Trunk CEO Tianlei Zhang stated that since Trunk was established three years ago, there is only one core task, that is, focusing on the application of autonomous driving trucks in the logistics field, and using leading autonomous driving full-stack technology to create a new generation of artificial intelligence transportation system NATS. However, to truly empower logistics transportation with autonomous driving, it must be connected to a nationwide real capacity system, and FORU Trucking ‘s intelligent capacity network is the most suitable carrier for NATS.

Tianlei Zhang pointed out that in the future, after the shipper places an order on the FORU Trucking APP, the platform will intelligently dispatch the self-driving trucks to help the shipper deliver the goods. It is expected to rely on the national key R&D plan to achieve the following: in the first stage, NATS will cover three major logistics hubs in North China, Central China, SouthChina and along the Beijing-Shanghai Expressway; in the second stage, full coverage of the ten major logistics hubs in the eastern region and full coverage of the ten highways will be achieved; finally, NATS will cover all logistics hubs and highways.

GLP (Global Logistic Properties), known as the “builder of the smart logistics ecosystem”, is a co-investor of FORU Trucking and Trunk. According to Zhonglang Dong, the management partner of GLP HIDDEN HILL CAPITAL, the best logistics company in the future must be a technology company. FORU Trucking and Trunk are both technology companies that use technology to serve logistics. The combination of intelligent dispatching and autonomous driving will create a new business model.

In the future, based on the powerful data resources of FORU Trucking and the leading autonomous driving technology of the Trunk, the two parties will empower each other and carry out deep collaboration with artificial intelligence, autonomous driving and big data as the core to provide intelligent, convenient and transparent integrated transportation services, thus reshaping logistics with technology, and accelerate the commercial implementation of autonomous driving in highway logistics.

FORU Trucking is a technology-driven logistics company that focuses on truckload transportation in China. It has received 7 rounds of investments from BOCGI, Matrix Partners China, JD Logistics and other investors. FORU Trucking is the first Internet company in China to apply big data and artificial intelligence in the truckload logistics sector. It uses advanced technologies to refactor the end-to-end transportation process, aiming to provide best price and service to shippers.