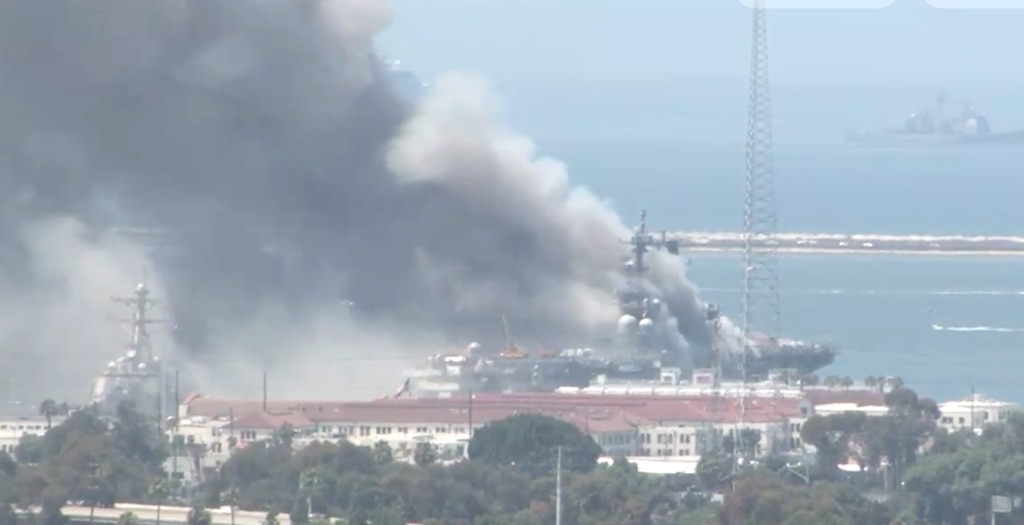 At least 17 US Navy sailors and four civilians are being treated for non-life threatening injuries after a fire broke out aboard the USS Bonhomme Richard (LHD-6) docked in Naval Base San Diego, California, on Sunday morning.

The US Navy said the fire was initially reported at around 8:30 a.m. Approximately 160 of the ship’s 1,000 crew members were aboard at the time. The LHD-6, an amphibious assault ship, was docked in San Diego and undergoing routine maintenance.

The Naval Surface Forces, Pacific Fleet reported that 17 sailors and four others had been transported to a local hospital for minor injuries, but the rest of the crew was accounted for.

“All inport ships have been contacted and directed to provide fire parties to possibly assist with firefighting efforts,” the fleet said in a statement.

ABC 7 San Diego reported that an explosion was heard before authorities responded to the scene Sunday morning, but it remains unclear what the source of the explosion and fire were.

Video footage from the scene showed neighboring ships being moved out of the vicinity. The USS Fitzgerald (DDG 62), a guided missile destroyer, was moved several piers away from the LHD-6. The USS Fitzgerald recently arrived in San Diego after undergoing roughly $523 million in repairs for nearly three years.

It was deployed to Japan as part of the Navy’s 7th Fleet for six years, before returning to the US in 2018. Once arriving to San Diego, it underwent flight deck upgrades to accommodate the vertical take-off and landing (VTOL) variant of the F-35 fighter.

The ship was first commissioned in 1998.