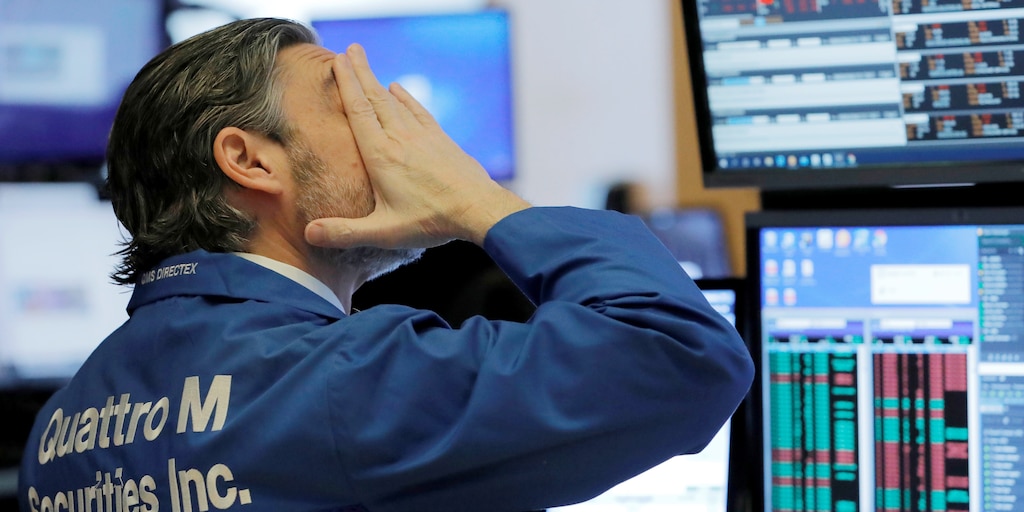 If you’re looking for a sanguine stock market forecast for the years ahead, you’re not going to get it from John Hussman, the former economics professor turned president of the Hussman Investment Trust. He’s been calling for a sharp market drawdown for a long time.

“I continue to expect the S&P 500 to lose about two-thirds of its value from its recent high to the trough of the next bear market,” Hussman penned in a recent note. “As I’ve regularly observed, a decline of that magnitude would not be a worst-case scenario.”

He continued: “Presently, we continue to observe extreme valuations, coupled with ragged and divergent market internals.”

Hussman provided his proprietary estimated 12-year annual total return for a conventional portfolio (60% stocks, 30% bonds, 10% cash — blue line) compared against the actual subsequent 12-year returns for that portfolio (red line) to demonstrate his thinking through a visual medium. Although this measure is off of its low of -0.16%, it still paints a dismal outlook. As of February 27th, it’s projecting just 0.70% returns for the next 12 years. 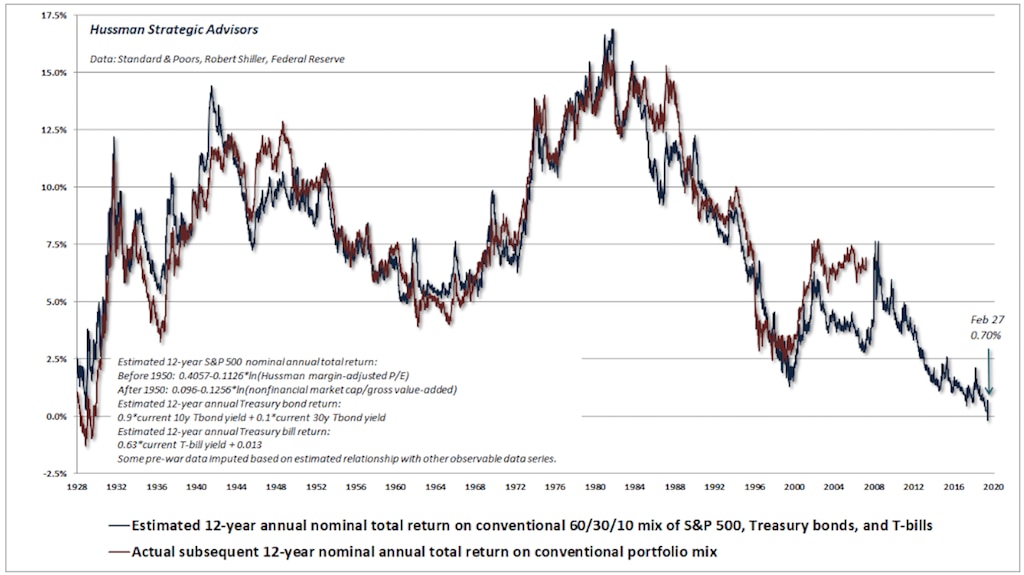 In addition to stretched valuations, Hussman says that most of the S&P 500’s gains have been sequestered to just a handful of issues. A disparity that’s not helping to suppress his anxieties. He refers to these securities as “story” and “glamour” stocks, and says they’re “hypervalued.”

Hussman leans on a recent chart from Bank of America to bolster this idea. It details a record percentage of the S&P 500’s market capitalization held by just five issues.

“This is a common feature of late-stage speculative episodes,” he said. “One of the hallmarks of financial bubbles that actual market returns in the years preceding a speculative peak tend to be higher than the returns that investors would have expected, based on typical historical relationships between valuations and subsequent returns.”

He added: “This sort of ‘error’ is precisely what leads investors to abandon the information provided by valuations at the worst possible moment.”

The environment that Hussman paints above is reminiscent to bubbles of the past. Large gains, high valuations, and diverging internals followed by a swift unwind.

What’s more, Hussman isn’t keen on any of the short-term market rallies that have taken place in the past few weeks. He notes that oversold, compressed technical conditions can lead to abrupt upswings in the market, but that they’re generally “fast, furious, and prone to failure.” He says the larger full-cycle risks are still in place.

“If there is one message here, it is that this pandemic should be taken seriously,” he said. “Regardless of how one judges the quality of data coming out of China (which may be limited to areas where strong monitoring and containment efforts are actually taking place), one thing is clear: the growth rate of cases outside of China is going the wrong way.” 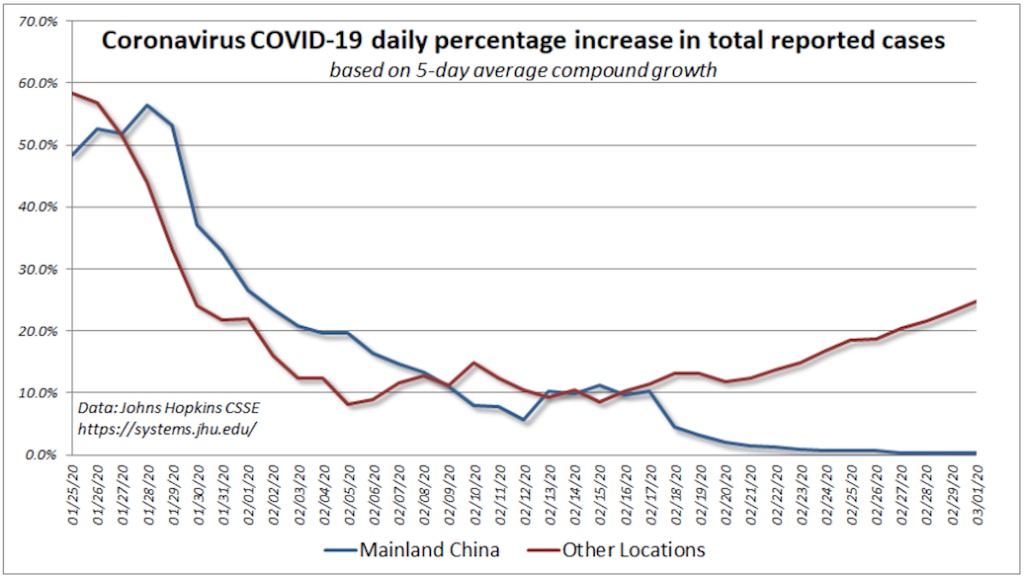 And here’s Hussman’s depiction of the total reported cases of the coronavirus in mainland China (blue line) and other locations (red line). 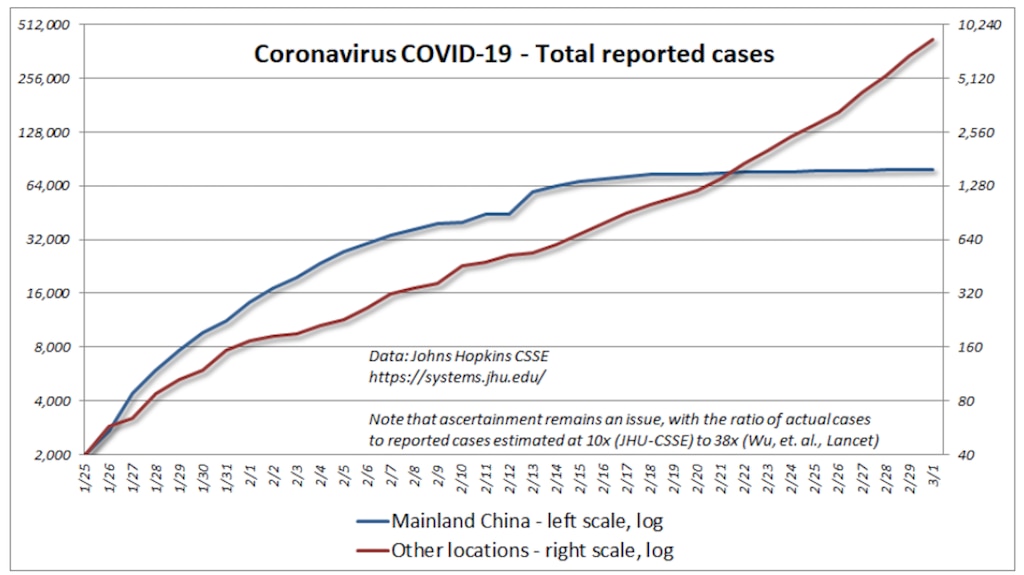 Hussman thinks the notion that the Federal Reserve interest rate cuts will quell markets is unfounded.

“Fed easing does not stop a virus,” he said. “Unless serious containment efforts reduce this growth rate substantially, a continuation would produce a 1000-fold increase in cases over the coming month.”

“It’s important to recognize that, unlike the compression we saw in December 2018, when the striking about-face of the Federal Reserve toward easing was enough to encourage speculators, sustained risk-aversion related to pandemic flu may prove far more persistent,” he concluded. “That’s certainly my expectation.”

For the uninitiated, Hussman has repeatedly made headlines by predicting a stock-market decline exceeding 60% and forecasting a full decade of negative equity returns. And as the stock market has continued to grind mostly higher, he’s persisted with his calls, undeterred.

But before you dismiss Hussman as a wonky perma-bear, consider his track record, which he broke down in his latest blog post. Here are the arguments he lays out:

In the end, the more evidence Hussman unearths around the stock market’s unsustainable conditions, the more worried investors should get. Sure, there may still be returns to be realized in this market cycle, but at what point does the mounting risk of a crash become too unbearable?

That’s a question investors will have to answer themselves — and one that Hussman will clearly keep exploring in the interim.