When Maria Resendiz asked a customer to wear a mask while working the McDonald’s drive-thru, she had no way of knowing the request would result in a trip to the hospital.

The 19-year-old was working at an Oakland, California, McDonald’s on June 27 when a customer pulled up without a mask. Resendiz told Business Insider that she requested the customer wear a mask, as instructed by her manager and as required by the local government.

The customer refused, saying “I don’t need no Mexican b—- to tell me what to do,” according to an OSHA complaint filed by Resendiz this week. According to the complaint, the man parked his car and began banging on the drive-thru window, screaming at Resendiz that he would kill her.

Resendiz said she originally tried to hold the window closed, as the lock was broken. But, when she went to close the window, the man grabbed the McDonald’s employee and began slapping and hitting her. When the man finally left, Resendiz says she called the police and was taken to Highland Hospital. 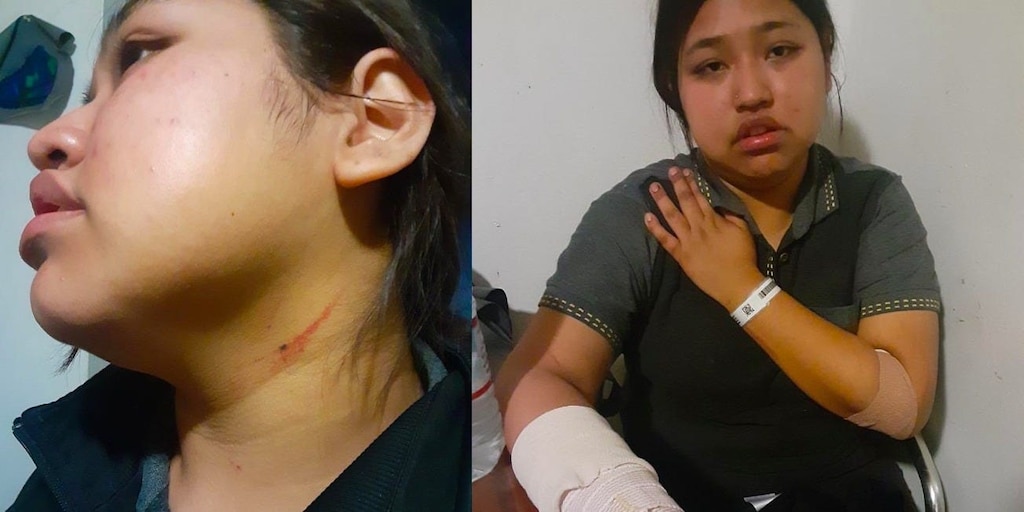 Resendiz says she has faced harassment and assault working at McDonald’s in the past, including customers throwing cups of feces and vomit at her and death threats from people who were unsatisfied with their orders. But, she says things have gotten more extreme during the coronavirus pandemic. Despite this, she said she has never received training on how to deescalate conflict with customers.

McDonald’s did not provide a comment on its de-escalation training, though the fast-food chain offered franchisees’ guidance on how employees could respond to customers who would not wear masks or socially distance in its reopening guide.

“I just want to tell customers not to disrespect us,” Resendiz told Business Insider. “We’re humans as well.”

As companies grapple with how to deal with customers who refuse to wear masks, restaurants are front and center. Making customers cover their faces — either due to local requirements or the restaurants’ policies — often becomes workers’ responsibility.

McDonald’s has internally emphasized the importance of personal protective equipment in recent weeks, saying in an internal letter on Wednesday that restaurants need to be disciplined about “requiring proper mask use by crew and – where applicable – customers.”

Michael Smith, the franchisee who owns the location, said in a statement to Business Insider that the safety and security of guests and employees are his top priority and that the business is continuing to work closely with Oakland Police Department.

“On Saturday, we learned of an altercation at our San Pablo Avenue restaurant,” Smith said. “The supervisor on duty called local law enforcement immediately to report the incident. Officers were welcomed into the restaurant to review security footage and are still investigating this matter.”

Resendiz said she wants McDonald’s to make changes so employees do not feel threatened when they show up for work.

“Security is all we need. … All we want is to feel safe,” Resendiz said. Resendiz is not alone in facing harassment and assault while working in restaurants during the pandemic. The new responsibility to enforce mandates to wear masks can put employees and other customers in danger.

A man was shot in the parking lot of a Chili’s in Forest City, North Carolina, last week following an argument over Governor Roy Cooper’s mask requirement, police told WBTV.  In May, a Waffle House customer shot an employee at a location in Aurora, Colorado, after being turned away by a cook for not wearing a mask, according to an NBC report.

Even in situations where no one is physically harmed, workers face harassment from anti-mask customers. When Starbucks barista Lenin Gutierrez asked a customer to wear a mask, as required in San Diego County, Gutierrez says that the customer began cursing at him, threatened to call the corporate office, and posted a complaint about the incident on Facebook.

The majority of customers seem happy — or at least willing — to wear masks. Gutierrez ultimately received more than $101,000 in tips after his refusal to serve the anti-mask customer went viral in late June. Roughly 7,500 people have donated to a GoFundMe for the barista.

Business Insider’s Aria Bendix reports that people who portray masks as a political issue or culture war ignore the growing body of research that indicates masks help prevent the coronavirus from spreading. For example, one model from the University of Washington predicted that if 95% of the US population wore face masks in public, the country could prevent roughly 33,000 COVID-19 deaths.

The minority of customers who are aggressively anti-mask put workers at risk, both in terms of spreading the virus and when it comes to harassment and violence on the job.

“In 30-plus years of studying retail and crisis situations, we have never seen a situation of customers being so rude to hourly employees,” Larry Barton, a professor of crisis management and public safety at the University of Central Florida, told Business Insider’s Mary Hanbury in May.